The helmsman used to stand by with tears in his eyes; he knew it was all wrong, but alas! Rule 42 of the Code, “No one shall speak to the Man at the Helm,” had been completed by the Bellman himself with the words “and the Man at the Helm shall speak to no one.“ So remonstrance was impossible, and no steering could be done till the next varnishing day. During these bewildering intervals the ship usually sailed backwards.

Lewis Carroll, The Hunting of the Snark, Preface

#42. All men shall not be saved at the length. They also are worthy of condemnation, who endeavour at this time in restore the dangerous opinion that all men, by they never so ungodly, shall at length be saved, when they have suffered pains for their sins a certain time appointed by God’s justice.

As far as I understand, some Christians define eternal damnation as being separated from God for ever. (Even as an atheist I am capitalizing that first letter. I respect others’ beliefs.) That sounds like what “Rule 42” of the Bellman’s “Naval Code” (capitalized first letters as in Carroll’s Snark) says.
Thomas Cranmer’s 42th Article about eternal damnation didn’t make it into the 39 Articles of the Anglicans, but the debate continued. The Reverend C.L. Dodgson was opposed to the dogma of eternal damnation.
In 1994, Angus MacIntyre suggested (The Reverend Snark, Jabberwocky 23, p. 51~52): “The Baker’s 42 Boxes are the original Protestant Articles of 1553, with Thomas Cranmer’s name on each.” I learned about MacIntire’s suggestion in an article by Karen Gardiner, an Anglican priest. In June 2018 she suggested that in The Hunting of the Snark, Carroll/Dodgson addressed the Article 42 in Thomas Cranmer‘s Articles (Life, Eternity, and Everything: Hidden Eschatology in the Works of Lewis Carroll, July 2018, p.25~41 in THE CARROLLIAN, No. 31).
My approach to a possible reference in The Hunting of the Snark to the 42 Articles was different. It started with discovering a pictorial reference in one of Henry Holiday’s Snark illustrations to Thomas Cranmer’s burning. If I look back at what came into my mind in the year 2014, it was Henry Holiday who made me curious to learn more about the articles 27, 41 and 42 and whether they might have been an issue for the Reverend Dodgson.

According to Karen Gardiner, “it would be unwise for anyone to imply that they have found the answer to the book’s mystery.” The book is Lewis Carroll’s and Henry Holiday’s The Hunting of the Snark (1876). Initially I was that unwise. But today I believe that there is one among several answers.

I started my Snark hunt in December 2008. Initially I probably had been quite unwise and thought that I had found the answer. That might explain the title The real story behind “The Hunting of the Snark” of an early post in The Lewis Carroll Forum. I am sorry for that botched exercise in self-irony. There is not just one single “real story” behind Carroll’s Snark poem. There are many answers.

In July 2018, the members of the LCSNA (Lewis Carroll Society of North America) received the 100th Knight Letter.

Also in this issue, Goetz Kluge makes the case that a seventeenth-century engraving may have influenced Henry Holiday’s last illustration for The Hunting of the Snark. Goetz’s excellent blog about all things Snark is at http://snrk.de/

On pages 55~56 you find a few lines which I wrote about the Baker and Thomas Cranmer in The Hunting of the Snark. 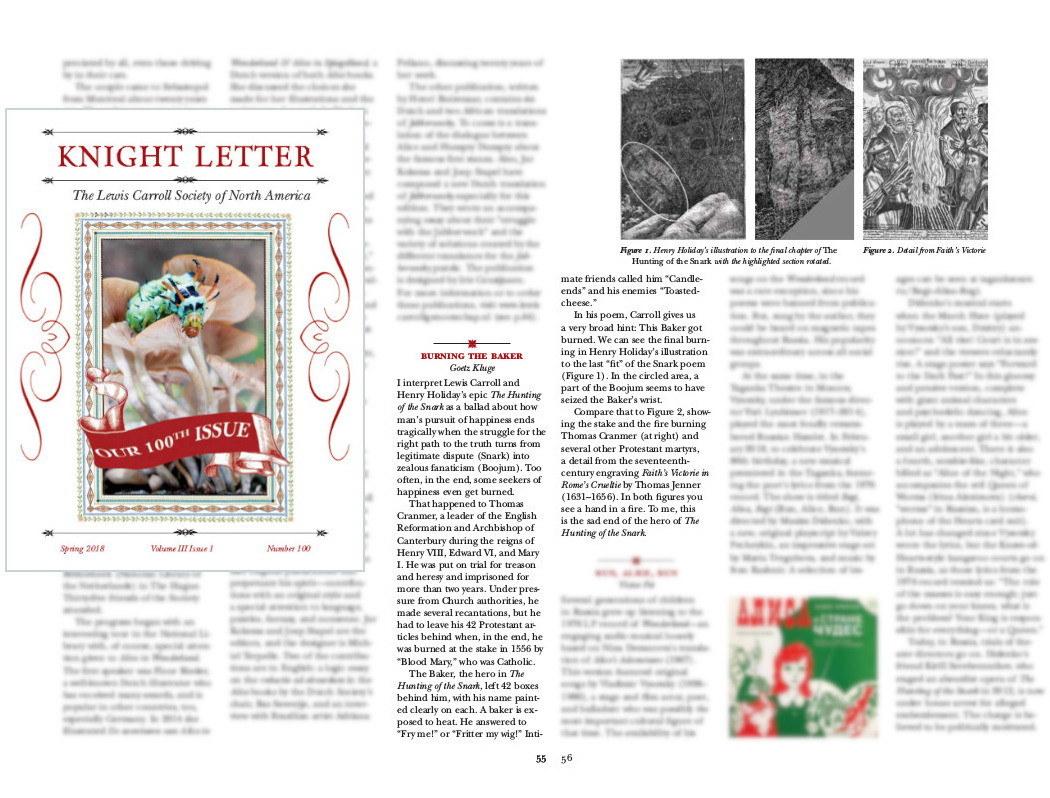 There also is an accompanying web page.

In the end, the Baker met the Boojum. As an allusion to Thomas Cranmer, the hero in Carroll’s Snark tragicomedy had been named “Baker” and also got some “hot” nicknames. Carroll went to the limits of black humor: The Baker got baked. 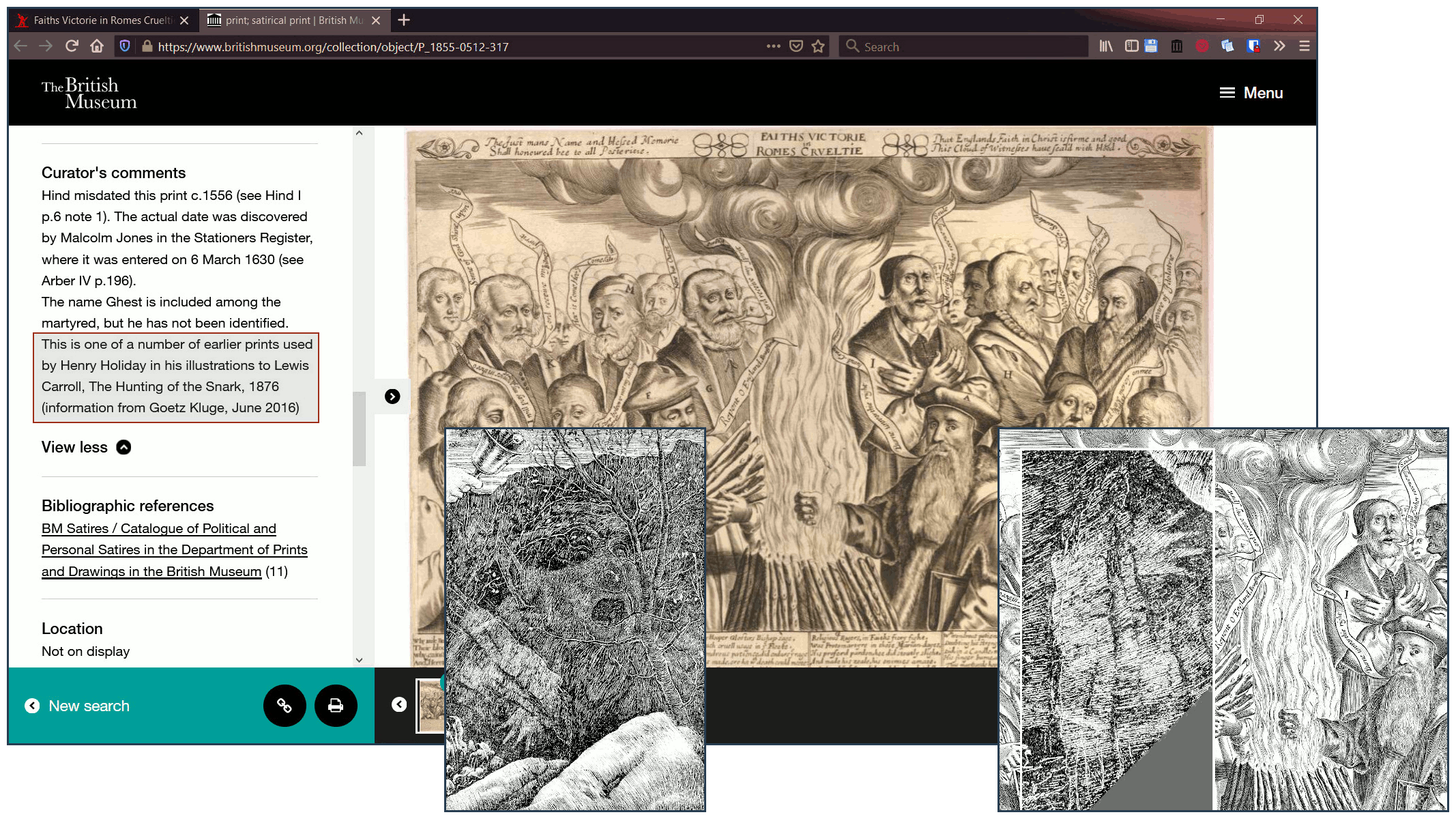 Incidentally, in parallel to my little note (p. 55~56 in the Knight Letter № 100) on the Baker’s hot names and on Henry Holiday’s pictorial reference to Thomas Cranmer’s burning, a paper «Life, Eternity and Everything, Hidden Eschatology in the Works of Lewis Carroll» suggesting textual references from The Hunting of the Snark to Thomas Cranmer’s Forty-Two Articles has been published in The Carrollian (July 2018, № 31, p.25~41), a journal of the Lewis Carroll Society in the UK. The author, Karen Gardiner, is an Anglican priest. She also addresses the objections of Revd. C.L. Dodgson (aka Lewis Carroll) against the dogma addressed by Article № 42 of Thomas Cranmer’s Forty-Two Articles.

Angus MacIntyre (1994), myself (2010, 2015, 2015), Mary Hibbs (2017), as well as Karen Gardiner (2018), we all independently from each other suggested that there are such references to Thomas Cranmer and his Forty-Two Articles (the Baker’s forty-two boxes). We arrived there coming from different starting points and different backgrounds. As for me, I initially just looked for Lewis Carroll’s (C.L. Dodgson’s) textual references as guidance for finding pictorial references in Henry Holiday’s illustrations.

PS: A friend told me that the caterpillar (here without hookah) on the front page of the 100th Knight Letter is a Hickory Horned Devil.