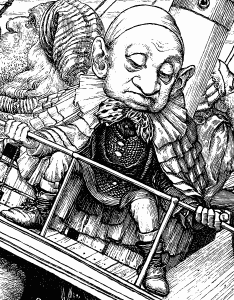 “Seven coats” could stand for the protection given by the catholic seven sacraments. From Thomas Cranmer’s 5th recantation:

And as concerning the sacraments, I believe and worship in the sacrament of the altar the body and blood of Christ, being contained most truly under the forms of bread and wine; the bread, through the mighty power of God being turned into the body of our Savior Jesus Christ, and the wine into his blood. And in the other six sacraments, also, (alike as in this) I believe and hold as the universal Church holdeth, and the Church of Rome judgeth and determineth.

In his final days [Thomas] Cranmer’s circumstances changed, which led to several recantations. On 11 December [1555], Cranmer was taken out of Bocardo and placed in the house of the Dean of Christ Church. This new environment was very different from that of his two years in prison. He was in an academic community and treated as a guest. Approached by a Dominican friar, Juan de Villagarcia, he debated the issues of papal supremacy and purgatory.

[1st ~ 4th] In his first four recantations, produced between the end of January and mid-February, Cranmer submitted himself to the authority of the king and queen and recognised the pope as head of the church. On 14 February 1556, he was degraded from holy orders and returned to Bocardo. He had conceded very little and Edmund Bonner was not satisfied with these admissions. On 24 February a writ was issued to the mayor of Oxford and the date of Cranmer’s execution was set for 7 March.

[5th] Two days after the writ was issued, a fifth statement, the first which could be called a true recantation was issued. Cranmer repudiated all Lutheran and Zwinglian theology, fully accepted Catholic theology including papal supremacy and transubstantiation, and stated that there was no salvation outside the Catholic Church. He announced his joy of returning to the Catholic faith, asked for and received sacramental absolution, and participated in the mass. Cranmer’s burning was postponed and under normal practice of canon law, he should have been absolved. Mary, however, decided that no further postponement was possible.

[6th] His last recantation was issued on 18 March. It was a sign of a broken man, a sweeping confession of sin. Despite the stipulation in canon law that recanting heretics be reprieved, Mary was determined to make an example of Cranmer, arguing that “his iniquity and obstinacy was so great against God and your Grace that your clemency and mercy could have no place with him”, and pressed ahead with his execution.

[7th] Cranmer was told that he would be able to make a final recantation but this time in public during a service at the University Church. He wrote and submitted [on 20 March 1556] the speech in advance and it was published [by John Cawood in All the Submissions and Recantations of Thomas Cranmer together with the six previous recantations] after his death. At the pulpit on the day of his execution, he opened with a prayer and an exhortation to obey the king and queen, but he ended his sermon totally unexpectedly, deviating from the prepared script.

In his Thomas Cranmer (1996, rev. 2016), Diarmaid MacCulloch did not use the term “recantation” for what Cranmer wrote on March 20th. MacCulloch called it “a final discourse” (p. 599). That discourse, however, obviously was consistent with the previous six recantations, because shortly after Cranmer’s burning, the government in London let Bishop Bonner certify all of Cranmer’s recantations together with that discourse before quickly publishing these papers in a printed edition.

I found further remarks on Cranmer signing recantations in note 15 to chapter 25 of Thomas Cranmer by Jasper Ridley (1962, rev. 1966). Of course there is much more. But already what I saw is too much for me as an atheist to digest.

As for the “three pairs of boots” (Snark, line 31), I have no good clue yet what that could stand for. It could be a reference to Trinity, to the Three Creeds or some other list with three items. We probably never will find a satisfactory prove for such an assumption. There is an easy way out of this: “Nonsense” would be a convenient explanation as nobody can prove it wrong.