(1) In Alice’s Adventures in Wonderland, the mad hatter asks: “Why is a raven like a writing-desk?” The answer seems to be simple: A raven is like a writing desk if you select a category as a set of properties, from which you can pick at least one property which both objects have in common. Then, with regard to that category, you can claim that the raven and the writing desk are similar: The communist Lenin has a nose, Joe Biden has a nose. Therefore Joe Biden is a communist. That’s how you can make almost anyththing similar to everything, even though the raven probably would not agree to be used as a writing desk. The bird might argue that things which have similar things in common are not necessarily similar things. Ravens are smart. The raven is like a writing-desk because the hatter is mad.
However, artists can make things similar. If the nose of a face has been flipped upwards down and after that nose job looks like the nose of another face, then you can assume that the nose flipping artist wanted to give you a hint that his illustration is a reference to another illustration from which he borrowed that nose. Henry Holiday had the intention to make the nose of the face in his illustration quite similar to the face in the print to which he referred. (However, the artist is dead. Roland Barthes probably would not like my reckonings about Holiday’s intentions.)

※ Left: Detail. The Banker after his encounter with the Bandersnatch, depicted in Henry Holiday‘s illustration (woodcut by Joseph Swain) to the chapter The Banker’s Fate in Lewis Carroll’s The Hunting of the Snark.
※ Right: Slightly horizontally compressed rendering of a detail of The Imagebreakers (1566-1568, aka Allegory of Iconoclasm), an etching by Marcus Gheeraerts the Elder.

(2) There are incidental similarities. Some of them are accidental similarities. They look similar, but were not intended to be similar. In my mad hunt for similarities between Henry Holiday’s Snark illustrations and the works of other artists, I took a white spot in Henry Holiday’s illustration and William Sidney Mount’s painting as evidence for Henry Holiday’s intention to make his depiction of the Banker look similar to that painting. But the spot was almost too easy to spot, so I asked Ian Mortimer to help me. He checked prints which he made using the original wood block (not the electrotypes). There was no white spot. It turned out that the white spot in the Holiday’s Snark illustration is an error. The flaw perhaps sneaked into the picture when the electrotypes were made. 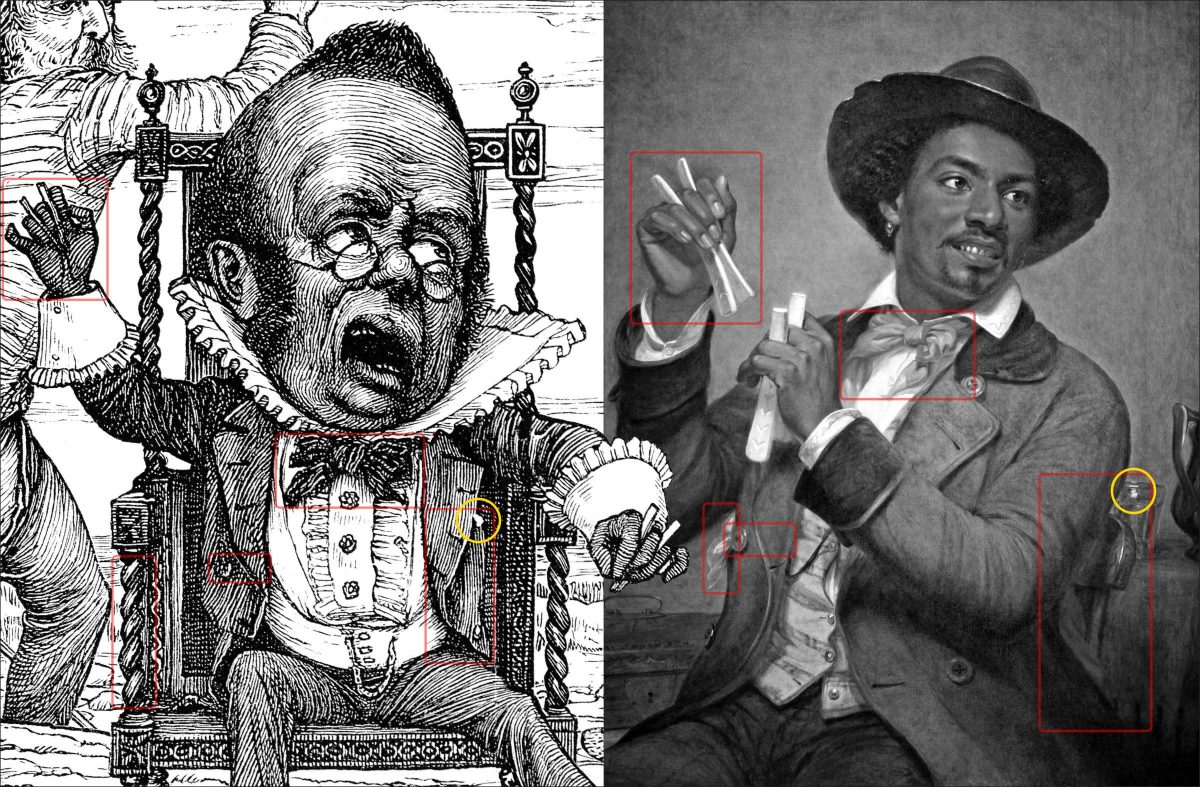 ※ Left: Detail from an illustration by Henry Holiday to Lewis Carroll’s tragicomedy The Hunting of the Snark. I marked five possible references by Henry Holiday to a painting by William Sidney Mount. The sixth one (marked with a yellow circle) is an unintented similarity.
※ Right: William Sidney Mount’s painting The Bone Player (1856) in mirror view.

(3) Some similarities were clearly intended to be similar.
This one is quite unobtrusive. But the “isomorphic relationship” (Douglas Hofstadter) is obvious.

※ Left: Detail from an illustration by Henry Holiday to Lewis Carroll’s The Hunting of the Snark depicting the Broker (upper left corner).
※ Right: Detail from an unknown artist: Edward VI and the Pope, a Tudor anti-papal allegory of reformation (16th century).

(4) Whether intentional or incidental, some similarities just help to use the face of Yoda’s look-alike without having to worry about any copyright. 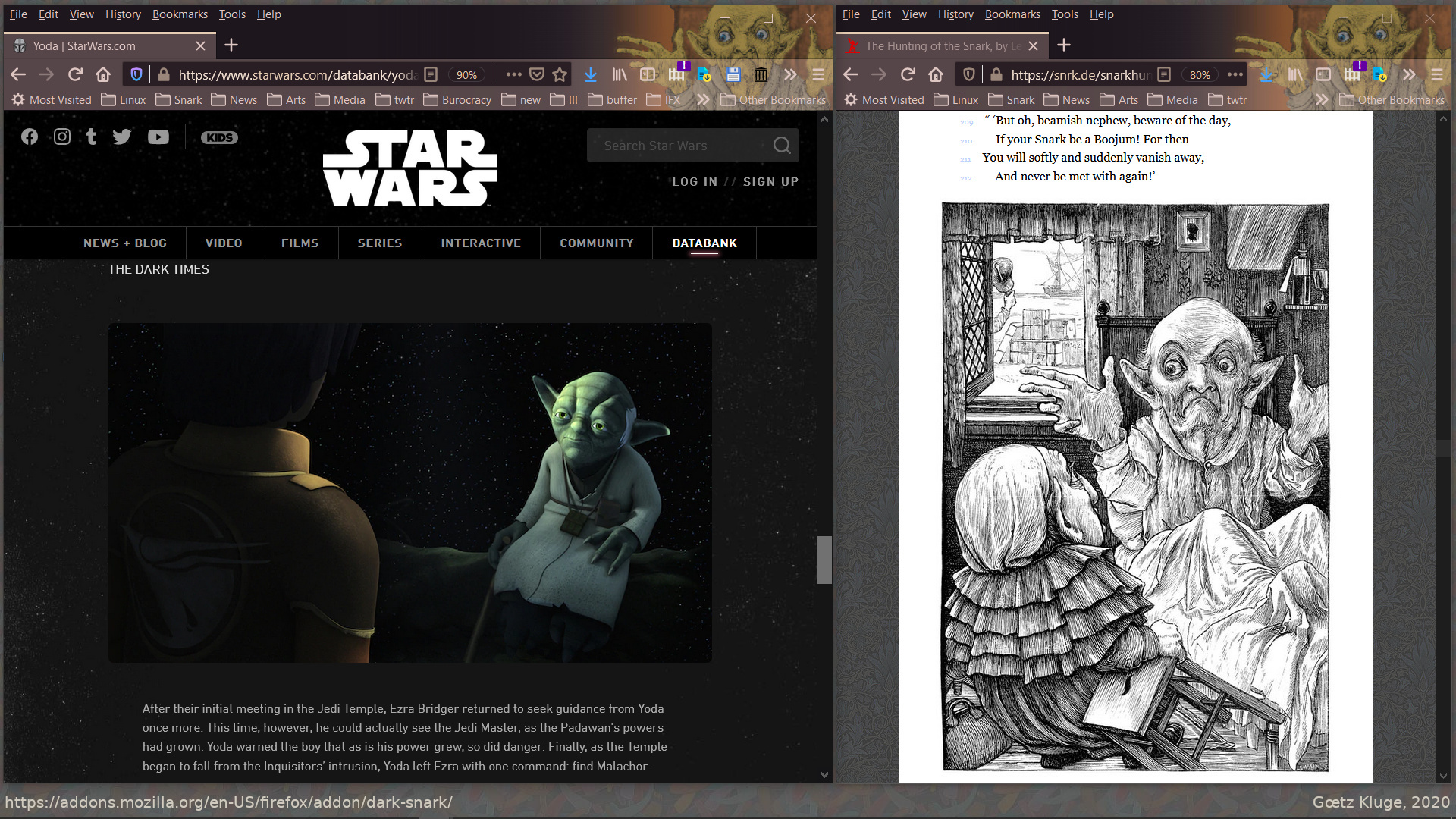 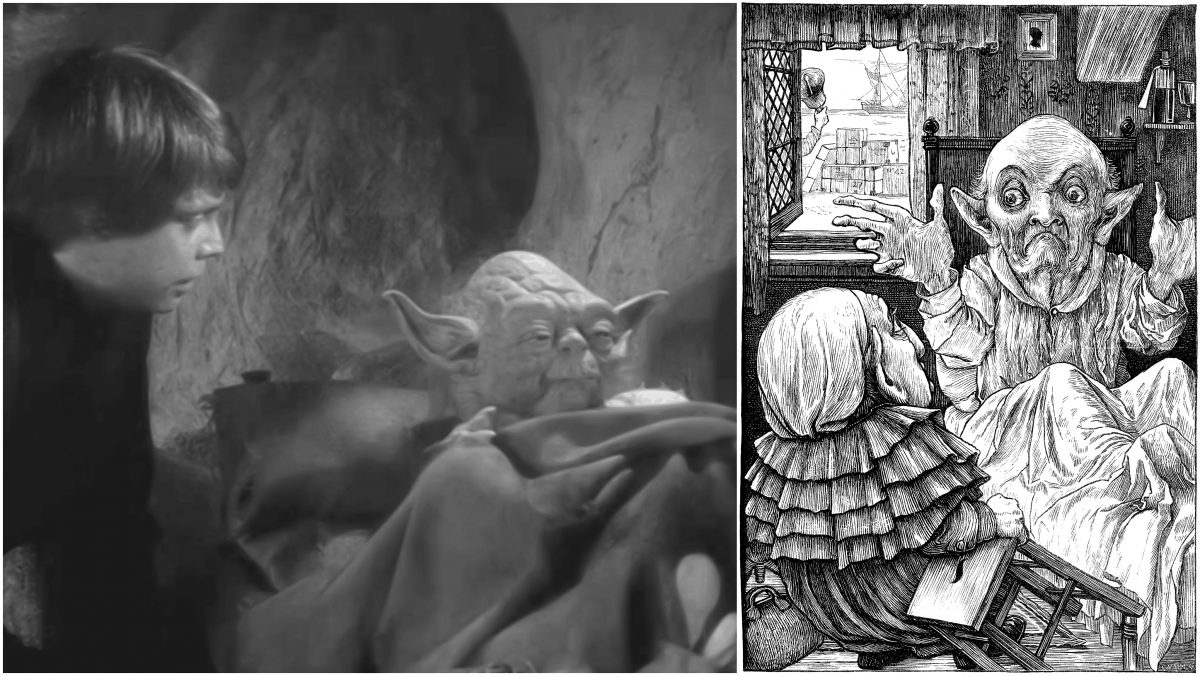 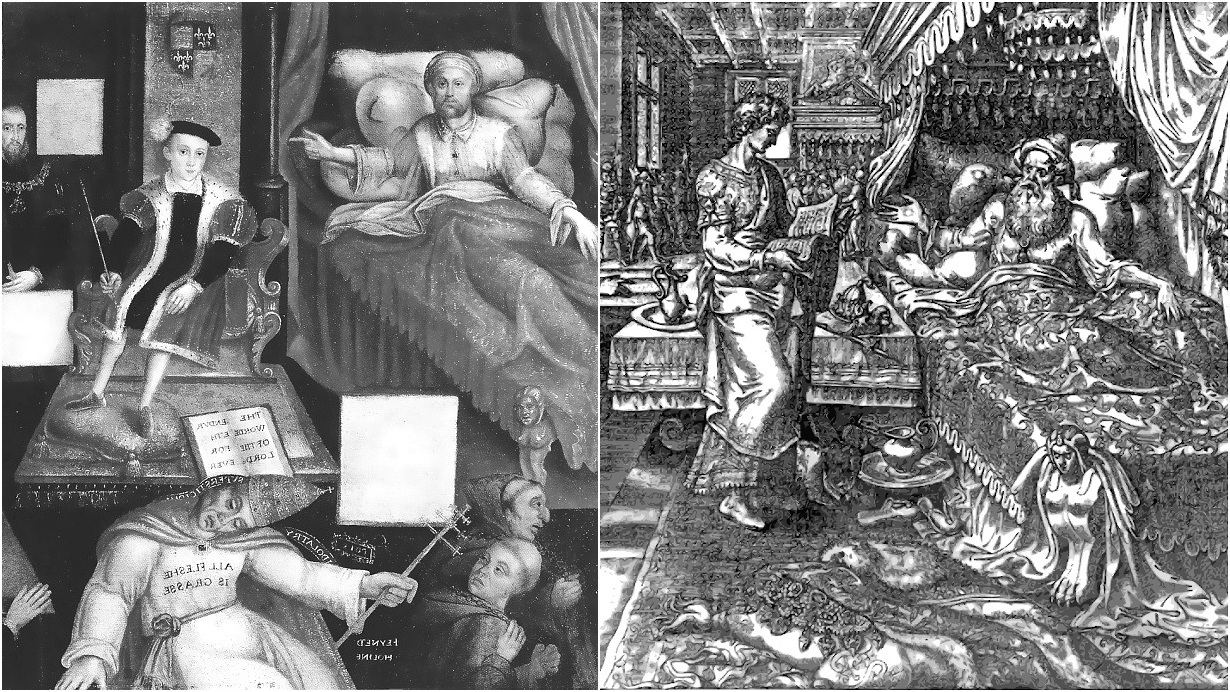