A bathing machine – and Christ Church Tom Quad, looking south towards the Hall with the temporary belfry mounted on top of it.
Photographer: C.L. Dodgson (Lewis Carroll) 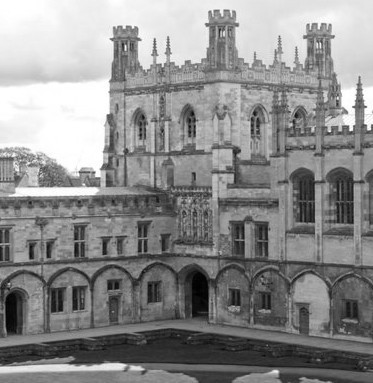 In 1872, the Christ Church College Cathedral belfry showed damages which made it necessary to rehouse its bells elsewhere. Driven by Dean Henry George Liddel, the New Belfry project started in 1872. The new bell tower was to be placed at the top right corner of Tom Quad, above the staircase to the dining hall. Alas, money run out and a very simple big wooden cube served as the new temporary belfry. It was so simple that C.L. Dodgson associated it with, among other shapes, a new design pattern for bonnet-boxes and bathing-machines (MG025). Later that economy belfry shyly went into hiding behind the walls we can see today (right image, built from 1876 to 1879). But it’s still there.

That temporary belfry was simple, but inspiring:

An exerpt from Dodgson’s Oxford squib The New Belfry of Christ Church where “Bathing-machines” are mentioned:

The idea has spread far and wide, and is rapidly pervading all branches of manufacture. Already an enterprising maker of bonnet-boxes is advertising ‘the Belfry pattern’: two builders of bathing-machines at Ramsgate have followed his example: one of the great London houses is supplying ‘bar-soap’ cut in the same striking and symmetrical form: and we are credibly informed that Borwick’s Baking Powder and Thorley’s Food for Cattle are now sold in no other shape.

The Snark was fond of bathing-machines:

More about a simple design, accompanied just by bell tingeling:

There are suggestions that the Bell in The Hunting of the Snark might be interpreted as a symbol for time and time pressure. I think that it also might have been used by C.L. Dodgson to continue lampooning Dean Henry Liddell‘s belfry project.

In his annotation MG047 to the preservation of the “symmetrical shape” of a boiled Jubjub, Martin Gardner did not consider that it might be a reference to the “symmetrical form” in § 7 of The New Belfry of Christ Church.

See also: Running Out Of Place: The Language and Architecture of Lewis Carroll (2005) by Caroline Dionne.

More on the belfry and bathing-machines:
※ The Vision of the Three T’s, chapter III

Twitter:
※ In a tweet by “Tower Poetry” you can see how that temporary bell tower looks today.
※ @thomasngmorris about “The New Belfry”. (I found this on 2019-06-08.)

2019-10-22: The paragraph on voting has been moved to https://snrk.de/the-mathematical-world-of-c-l-dodgson.