The Snark hunting crew consists of ten members.
Is that true?

This is how the crew members are introduced (MG017):

Martin Gardner (MG046) told us that “Phyllis Greenacre thinks that the ten members of the crew represent the ten children of the Dodgson family.” However, I think that to Dodgson/Carroll in his private life there was nothing important to be referred to in his fiction writings, at least not consciously. To me it is more probable that Carroll might have alluded, for example, to people involved in debates at Oxford Christ Church College, in fierce conflicts in the history of the Anglican church and in discussions about Charles Darwin’s findings. And because of Carroll’s ambiguous introduction of the Boots, I even think that we cannot be sure that there are ten crew members: There could be only nine Snark hunters.

Wikipedia user “Carlo Fortunato” (2007-10-12 20:17 UTC) suggested that Boots could be a portmanteau (see also etymonline.com) for Bonnets and Hoods:

Thus, Flemming too suggests that Boots is a portmanteau. In consequence, also Flemming’s German translation allows for a similar construction of a portmanteau.

In Carroll’s long poem, Snark hunters are various characters, nine in all, whose names start with the letter B: a Bellman, a Bonnet Maker, a Barrister, a Broker, a Billiard-Marker, a Banker, a Butcher, a Baker, and a Beaver.

There is no Boots. In contrary to Flemming, Roubaud does not maintain Boots (Cireuer de souliers = shoe shine) as a portmanteau for (maker of) Bonnets and Hoods ((Fabricant de) bonnets et capuches). Consenstein’s count of nine Snark hunters seems to be based on his own insight rather than on Roubaud’s translation.

With the Boots being the maker of Bonnets and Hoods,
there would be nine Snark hunters only instead of ten. 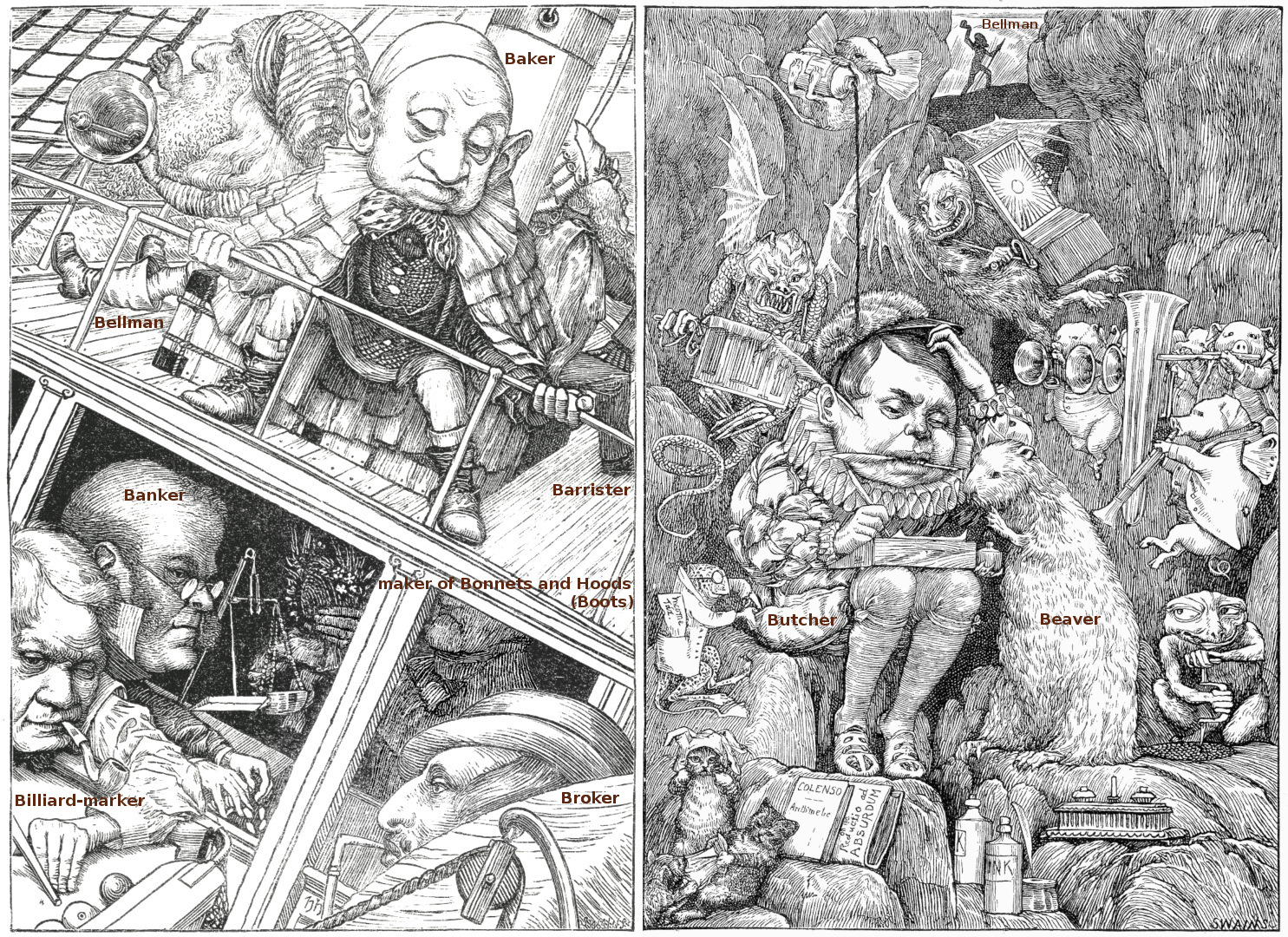 There is no tenth crew member in Henry Holiday’s illustrations to Lewis Carroll’s The Hunting of the Snark. In the illustration on the left side, Henry Holiday only shows the lower part of the face of someone who makes something like a bonnet. Where is the Boots? In total, Holiday’s Snark hunting party consists of nine members only.

Let us take them in order of their introduction by Lewis Carrol:

It has been said often enough (at least more than three times) that the Snark hunting party consists of ten members. All Snark readers had and have been given the choice to believe that, so why not. I have a choice too and decided that there only are nine members. I can do that because line #10 of Carroll’s poem either introduces a new Snark hunter, or it describes the Snark hunter who has been introduced in line #9. Here we have a clear ambiguity. Therefore we can choose what we like to choose.

I assume that Carroll had created “Boots” as a non-sequential interlaced portmanteau built from “maker of Bonnets and Hoods” in his tragicomical ballad The Hunting of the Snark (1876).

Why do I prefer nine crew members? It’s simple. If the Boots and the Bonnetmaker are one person, then nobody can complain about the missing Boots in Henry Holiday’s illustrations. The Boots and the maker of Bonnets and Hoods being the same person could explain, why Henry Holiday seemingly didn’t depict the Boots in his illustrations. But I think, that he did, because he partially depicted the Bonnetmaker.

From The Hunting of the Snark:

[…] This also seems a fitting occasion to notice the other hard words in that poem. Humpty-Dumpty’s theory, of two meanings packed into one word like a portmanteau, seems to me the right explanation for all.

Supposing that, when Pistol uttered the well-known words—

“Under which king, Bezonian? Speak or die!”

Justice Shallow had felt certain that it was either William or Richard, but had not been able to settle which, so that he could not possibly say either name before the other, can it be doubted that, rather than die, he would have gasped out “Rilchiam!”

Introduction of the Snark hunting party (with nine or ten members):

Fit the First
THE LANDING

More about the Boots (again from the PREFACE) in a footnote:

The Bellman, who was almost morbidly sensitive about appearances, used to have the bowsprit unshipped once or twice a week to be revarnished, and it more than once happened, when the time came for replacing it, that no one on board could remember which end of the ship it belonged to. They knew it was not of the slightest use to appeal to the Bellman about it— he would only refer to his Naval Code, and read out in pathetic tones Admiralty Instructions which none of them had ever been able to understand— so it generally ended in its being fastened on, anyhow, across the rudder. The helmsman¹ used to stand by with tears in his eyes; he knew it was all wrong, but alas! Rule 42 of the Code, “No one shall speak to the Man at the Helm,” had been completed by the Bellman himself with the words “and the Man at the Helm shall speak to no one.“ So remonstrance was impossible, and no steering could be done till the next varnishing day. During these bewildering intervals the ship usually sailed backwards.

¹ This office was usually undertaken by the Boots, who found in it a refuge from the Baker’s constant complaints about the insufficient blacking of his three pairs of boots.

This means that the helmsman usually was the Boots, who had to unship the bowsprit once or twice a week to be revarnished. What does Carroll’s ballad tell us about the Bonnetmaker and the Boots?