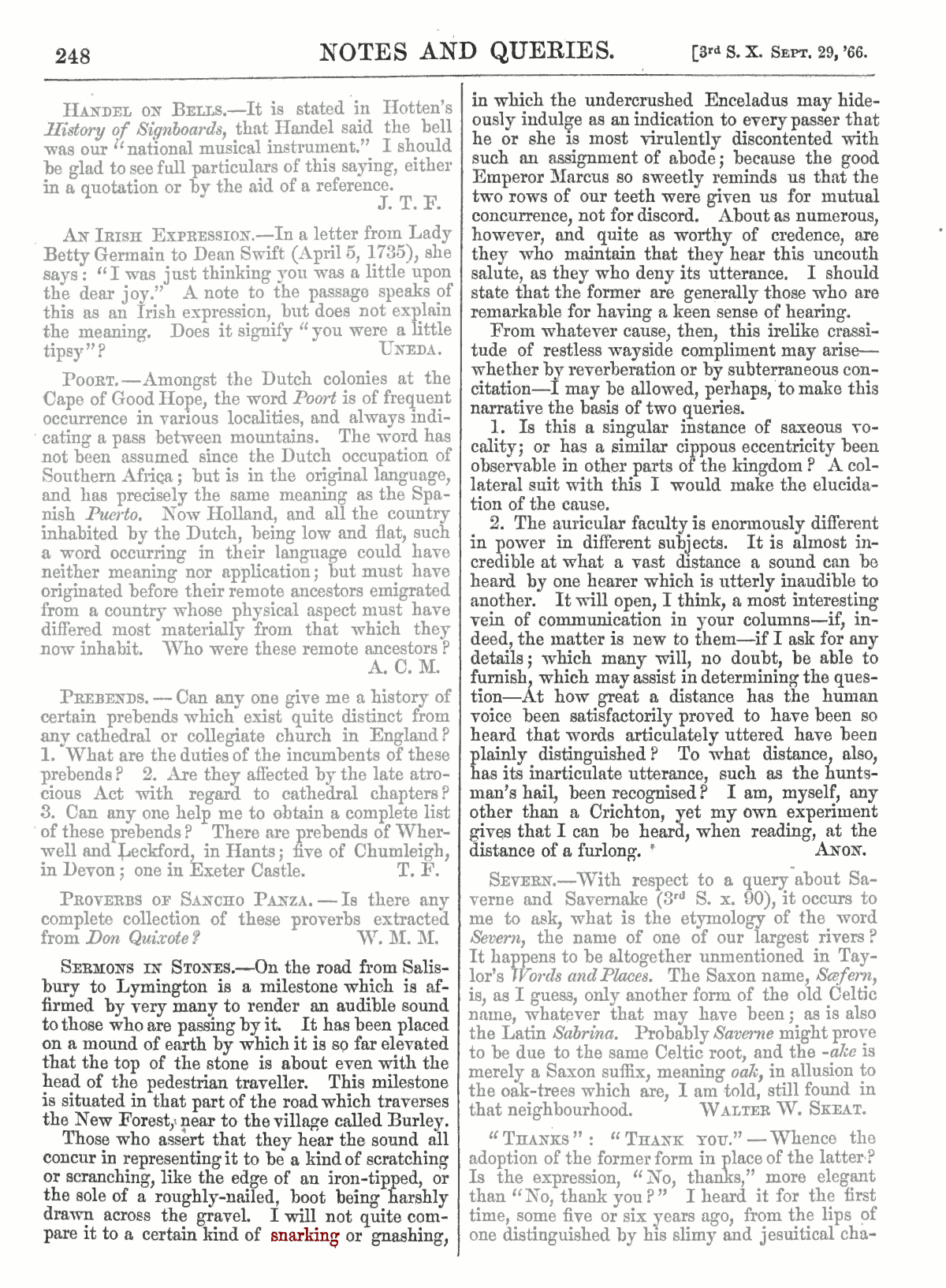 Now we know that the sounds produced by that stone are not quite like “snarking or gnashing”. I know how gnashing sounds. But what is the sound of snarking? (Quora, Reddit)

It often is said that C. L. Dodgson (aka Lewis Carroll) invented the word “Snark”. However, at least the onomatopoeic word “snarking” has been mentioned already in the year 1866. Carroll started to write The Hunting of the Snark in the year 1874.

Here is the text which you saw in the scan shown above:

SERMONS IN STONES. — On the road from Salisbury to Lymington is a milestone which is affirmed by very many to render an audible sound to those who are passing by it. It has been placed on a mound of earth by which it is so far elevated that the top of the stone is about even with the head of the pedestrian traveller. This milestone is situated in that part of the road which traverses the New Forest, near to the village called Burley.
Those who assert that they hear the sound all concur in representing it to be a kind of scratching or scranching, like the edge of an iron-tipped, or the sole of a roughly-nailed, boot being harshly drawn across the gravel. I will not quite compare it to a certain kind of snarking or gnashing, in which the undercrushed Enceladus may hideously indulge as an indication to every passer that he or she is most virulently discontented with such an assignment of abode; because the good Emperor Marcus so sweetly reminds us that the two rows of our teeth were given us for mutual concurrence, not for discord. About as numerous, however, and quite as worthy of credence, are they who maintain that they hear this uncouth salute, as they who deny its utterance. I should state that the former are generally those who are remarkable for having a keen sense of hearing.
From whatever cause, then, this irelike crassitude of restless wayside compliment may arise — whether by reverberation or by subterraneous concitation — I may be allowed, perhaps, to make this narrative the basis of two queries.
1. Is this a singular instance of saxeous vocality; or has a similar cippous eccentricity been observable in other parts of the kingdom? A collateral suit with this I would make the elucidation of the cause.
2. The auricular faculty is enormously different in power in different subjects. It is almost incredible at what a vast distance a sound can be heard by one hearer which is utterly inaudible to another. It will open, I think, a most interesting vein of communication in your columns — if, in deed, the matter is new to them — if I ask for any details; which many will, no doubt, be able to furnish, which may assist in determining the question — At how great a distance has the human voice been satisfactorily proved to have been so heard that words articulately uttered have been plainly distinguished? To what distance, also, has its inarticulate utterance, such as the huntsman’s hail, been recognised? I am, myself, any other than a Crichton, yet my own experiment gives that I can be heard, when reading, at the distance of a furlong.