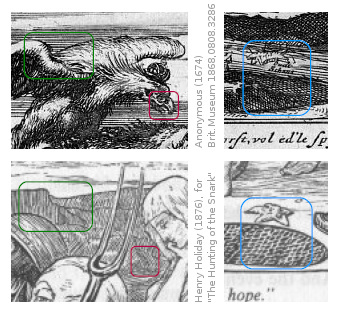 The 1674 print is on the right side. The animals in that print are based on illustrations by M. Gheeraerts the Elder to Aesop’s Fables. (The print now is located at British Museum, BM Satires 1047, reg.no.: 1868,0808.3286.) This print depicts William III as well as the allegorical figures for “religion” and “liberty”. In his illustration (left side), Henry Holiday probably alluded to that 1674 print. What is evidently known is that he discussed the allegorical depiction of “care” and “hope” with Dodgson/Carroll:

When I sent Mr. Dodgson she sketch of the hunting, in which I had personified Hope and Care

he wrote that he admired the figures, but that they interfered with the points, which consisted in the mixing up of meanings of the word “with”. I replied, “Precisely, and I intend to add a third – ‘in company with’ – and so develop the point.” This view he cordially accepted, and the ladies were admitted.

If you want to use my images, don’t buy them from Alamy (Image ID: MYNNXF).