attributed to C.G. Jung (Flying Saucers, 1959; not “Thinking is difficult, that’s why most people judge.”) 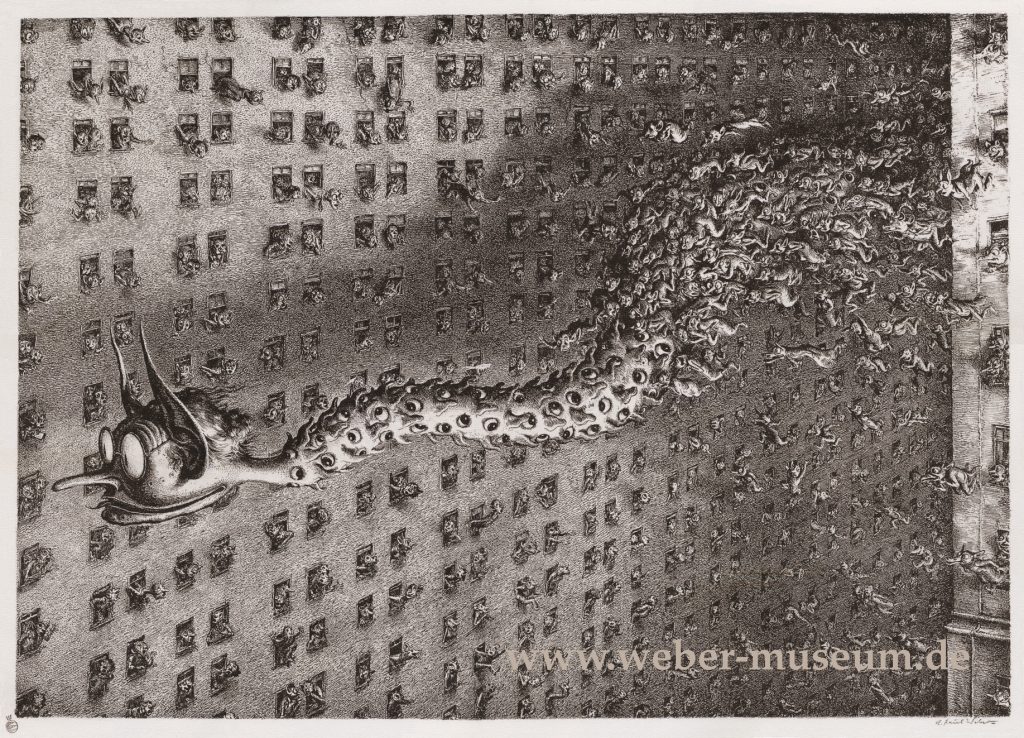 So I tried to learn more about Carroll, and of course also ran into that pop culture pedophilia discussion surrounding Carroll’s biography. As far as I know, the debate started in 1932. Quite a few years later, the internet as our new rabbit hole gave it a big boost and provided the debaters with a fertile stage for slander, gossip and rumors. Repetition increases perceived truth equally for plausible and implausible statements. Most of the toxic contributions (e.g. in Twitter) tell more about the fantasies and the mindsets of their authors than about Lewis Carroll.

The Reverend Dodgson was fighting with “mental troubles“, as he called them himself. These troubles could be religious doubts (e.g. because of Charles Darwin’s findings) and temptations of all kind. As for sexual issues, I think that the evaluation of the available evidence is difficult outside of academia. So it’s difficult to me too. (I am an engineer, not a forensic psychologist.) Nevertheless, perhaps I found some links to decent publications.

Initially, this page only was about doctored images, which had been infesting the discussion since quite a few years. 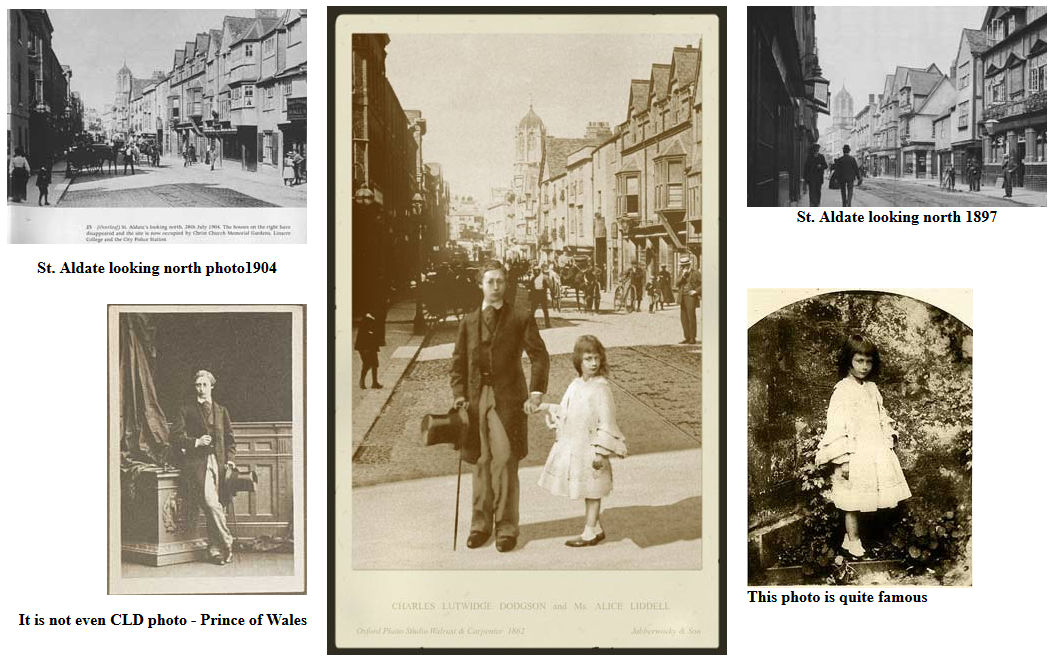 It isn’t even a photo of C.L. Dodgson.
(Source of this image: http://studiotreasure.com/alice/April1_explanation.htm) 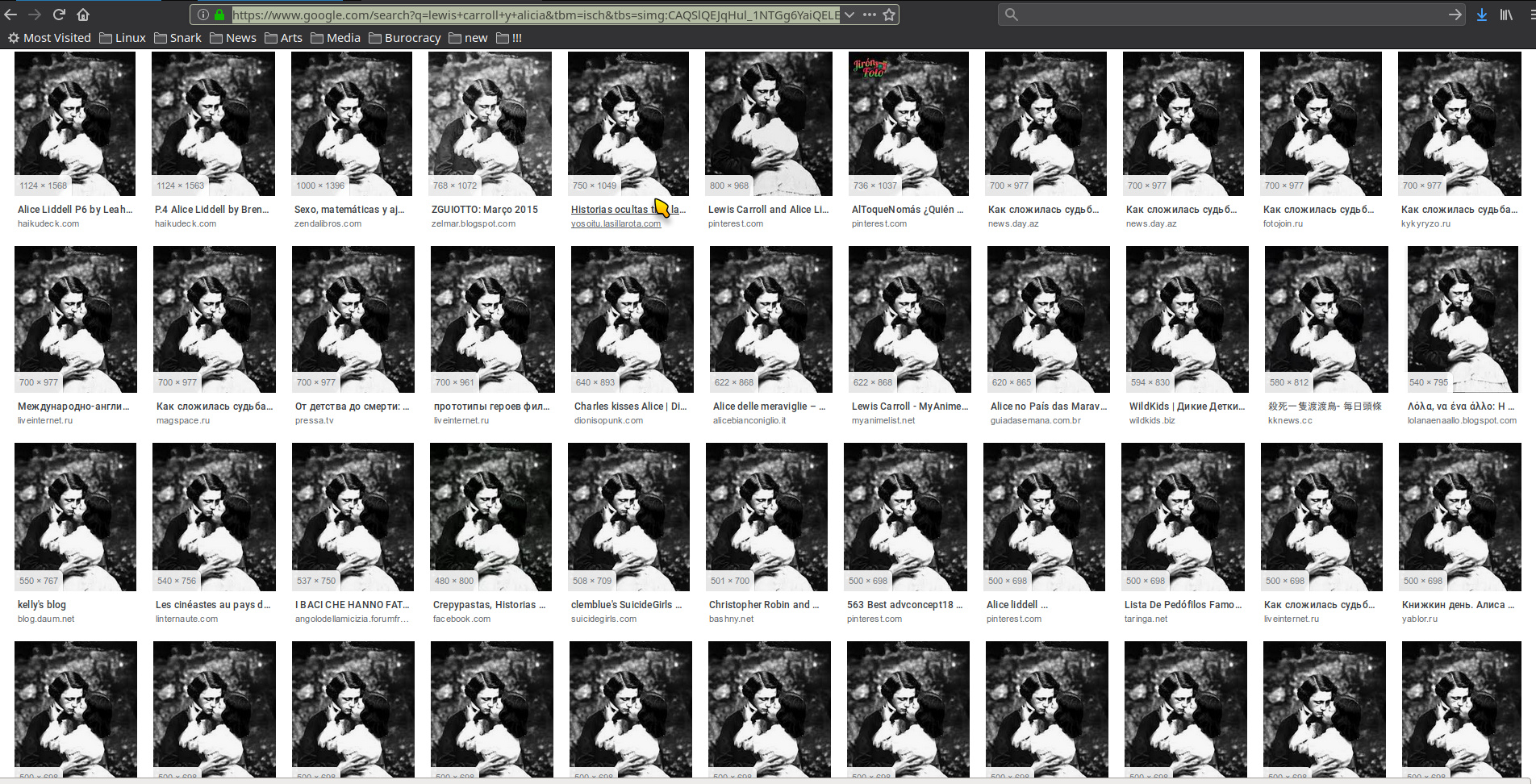 Another infamous collage infesting the Internet epidemically was made by David O’Kane in 2005, combining elements from
(1) a self portrait by C.L. Dodgson (aka Lewis Carroll),
(2) CLD’s photo (1860) of the three Liddell sisters,
(3) a photo showing O’Kane’s own features.
(Source: p. 145~148, Alice in Transmedia Wonderland, by Anna Kérchy, 2016)

※ The image of the Liddell sisters has been taken from NPG: mw66627.
※ See also (from casacinepoa.com.br): Alice no país das bobagens … [Alice in the country of nonsense …]).
※ Twitter
※ As an example, you find the fake photo being used in artnet.org by Lorena Muñoz-Alonso.

In both photo collages shown above, an image of Alice Liddell was mounted into another photo. The photos are examples which show how images of Lewis Carroll have been constructed. 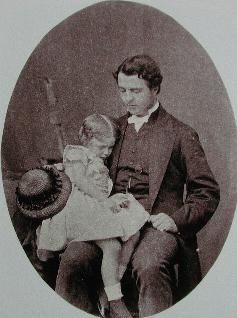 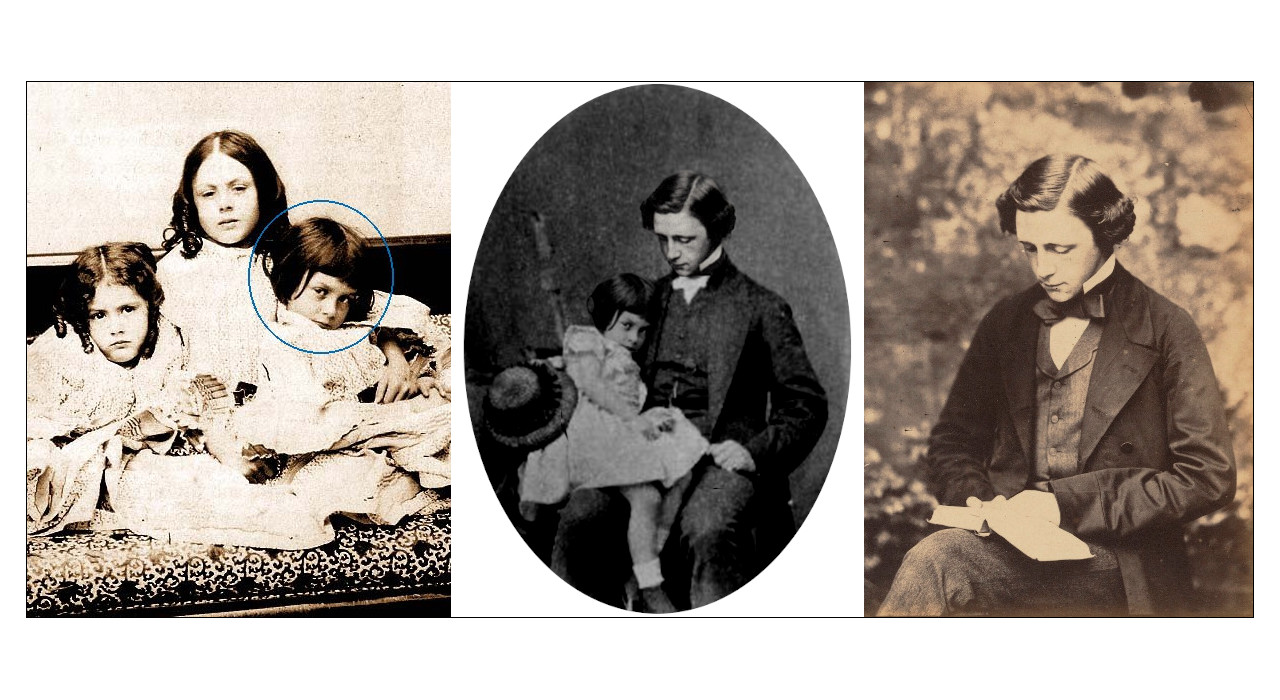 This is a misleading image found in Twitter which looks like a clipping from a newspaper: “London, 18th August 1880 // SOCIETY // Lewis Carroll gives up photography due to paedophilias rumours”. The coloring, the shading in the image and the choice of fonts show that the image cannot be a copy from 1880 print media. In the image, the name “Charles Lutwidge Dodgson” is misspelled as “Charles Lutwigde Dodson”. And the Reverend Dodgson was not a “priest”.

The source “timetravellerblog” is gone. It was a “TimeTraveller Newspaper” with “Gossipings and curiosities from the past”. The blogger probably didn’t mean to mislead people with the image. The blogger’s note: “These articles are just fictional possible articles of the time and they are based on the real events.”

http://aminoapps.com/p/cs97mb even contains a Spanish version of that made up-article.

In the WayBackMachine you can find a copy of the timetravellerblog entry (dated 2007-09-06). I like a comment by “Megan”.

(As for the 2800 photos, see page 5 in the Knight Letter № 102 in Chris Morgan’s report about the March 2019 meeting of the LCSNA, where Edward Guiliano spoke about Dodgson’s photography and illustrations.)

In the UK of the 20th century, Dodgson would have been under an investigation as the one based on the 1978 Protection of Children Act and mentioned in the article Portrait of the artist as an accused man by Ian Gale (Independent, 1994-02-15). In our century, the ease of distributing graphic content in the Internet made an even stricter application of rules to protect children necessary.

The makers of that “documentary” presented by Martha Kearney duped a few contributors, among them Edward Wakeling.

The programme should have gone back to the contributors at an earlier stage to inform them about the new image and to give them adequate time to consider whether they were content with their contributions to the programme. 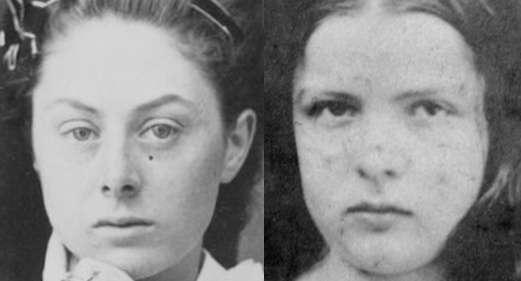 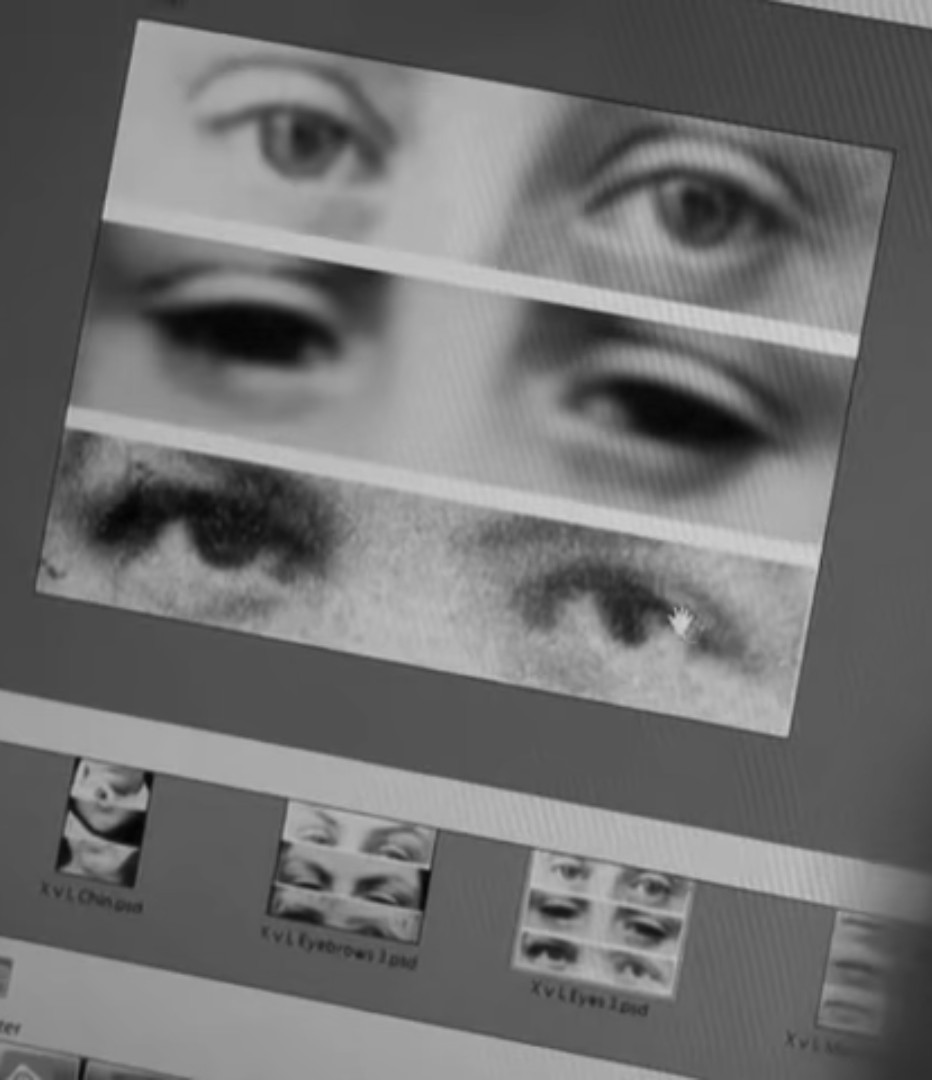 The left image shows a side-by-side comparison of the face of Lorina Liddell (left, age c.20 years) and the face of a girl (right, age c.14 yrs.) from a 18th century photo owned by the Musée Cantini in Marseilles. The photo allegedly was taken by Dodgson/Carroll, but according to experts of the Musée Cantini and Carroll expert Edward Wakeling the picture was not taken by Dodgson.

The complete photo of the girl (documenting spine and eye issues?) was presented by Martha Kearney as a nude image allegedly of Lorina Liddell in that attempted documentary, broadcasted by the BBC under the title The Secret world of Lewis Carroll.

In the the right image (screenshot from the “documentary”) you see a cursor which David Anley (who runs a forensic consultant business for image analysis) has moved to exactly the place where the eyes are different while telling that they are same. Actually, it is that part of the eye of the french girl which lets me assume that there is a medical issue. There also seem to be scars in the face. Strangely, Anley didn’t comment on that. You can see yourself that the similarities between the images are less clear than what Anley implies. I wonder why the forensic specialist Anley didn’t consider that the photo might have been taken in France for documentary purposes rather than for pornographic purposes.

Also statements of the photographic conservation specialist Nicholas Burnett were presented in a way which left the impression that he concluded that the photo was authentic and probably of Liddell.

In the BCC documentary it was pretended that they discovered that alleged Lorina photo shortly before the screening.

The BBC found it in the summer, several months before the late January screening, not late in the day, as they say.

The historical consultant to the producers of the documentary was Robert Douglas-Fairhurst. In an interview with the Cherwell Archive he said:

I know that a number of people were annoyed by the decision to include the photograph, as there’s no definite proof that it shows Lorina Liddell or that it was taken by Carroll. But (and admittedly I was the programme’s historical consultant), it’s interesting that someone had already attributed it to him. And that probably says more about us as it does about him – it shows how far he has become a lightning conductor for all our fears about childhood and sexuality, and it is worth asking ourselves why. Of course, there are fans of Carroll’s who see such questions as irrelevant muckraking. Perhaps that’s because when we talk about the Alice books we are also talking about ourselves, as these are some of the books we remember most fondly from childhood, and that makes it hard for some readers to hear anything potentially awkward about Carroll without it being experienced as a personal assault.