Gotz Kluge wondered out loud (in the Star Wars discussion group on the online Reddit community) if perhaps Yoda was a relative of the Baker’s uncle, as depicted by Henry Holiday in Fit the Third of The Hunting of the Snark. Of this question, you the judge can be.

Here is a copy of the image which I posted in reddit: 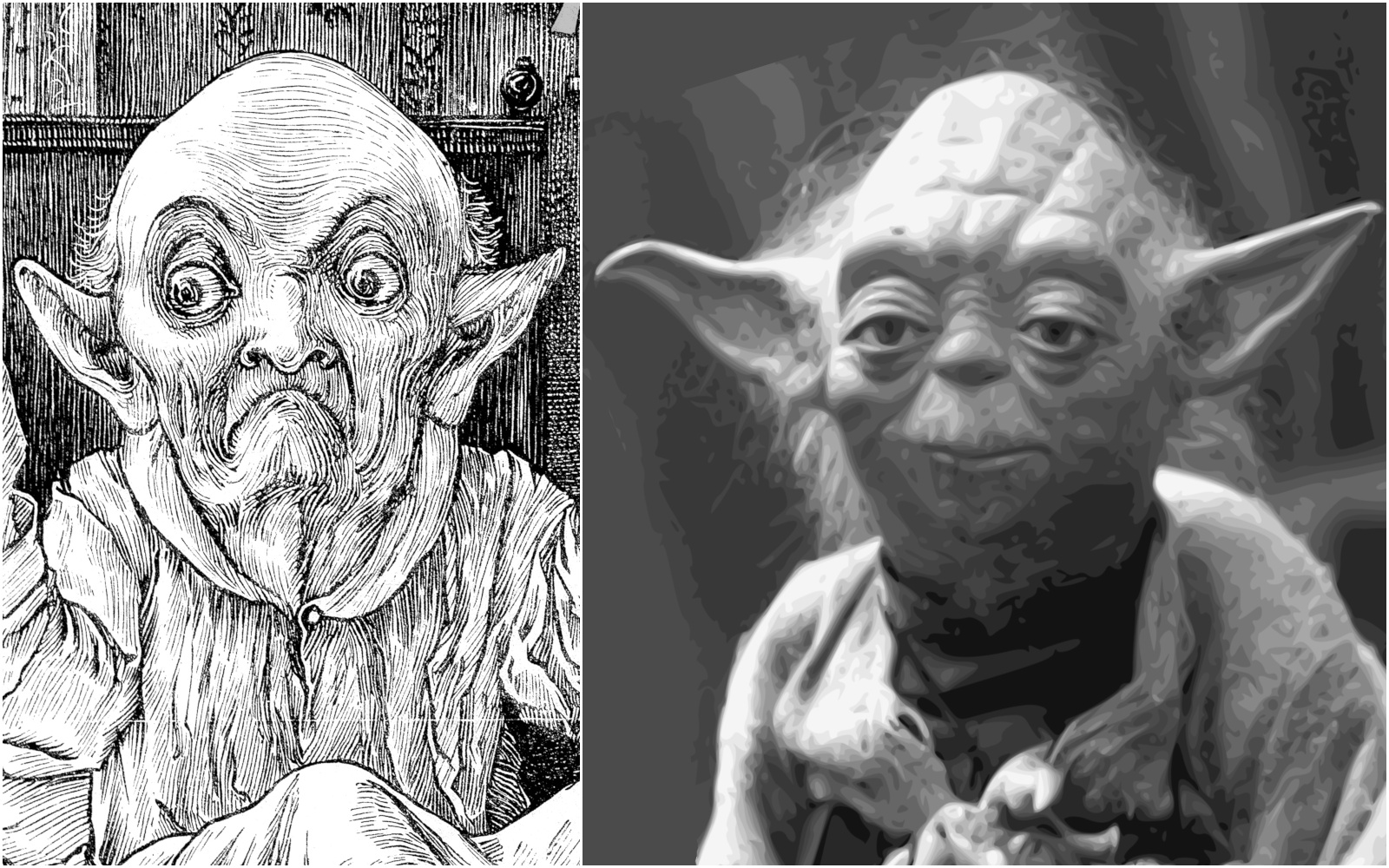 The Baker’s uncle Yoda’s relative is.

On the left side you see The Baker’s Uncle depicted by by Henry Holiday in an illustration (engraved by Joseph Swain) to Lewis Carroll’s The Hunting Of The Snark (1876). The slightly horizontally compressed and rotated image on the right side depicting Yoda is based on a photo in the Wikipedia.

[…] In the early story development of Yoda, the initial descriptions varied from a large alien being to a tiny one. The diminutive direction ultimately won out, and Empire’s concept artists developed illustrations of gnome-like and elfin creatures. In the story treatment, Yoda’s full name was Minch Yoda, and in the first draft, he was known only as Minch. Once the design was settled, Yoda was realized by make up and creatures supervisor Stuart Freeborn, who designed the alien as an intricately detailed puppet. Yoda was brought to life by the vocal and puppeteering performance of Frank Oz, a veteran collaborator of Jim Henson.

Yoda was meant to continue the role of Obi-Wan Kenobi, whom George Lucas had killed off due to dramatic necessity in A New Hope. Given the freedom to create a new character, Lucas devised Yoda as an odd, ancient and incredibly wise mystic. He tied the two characters together, though, by having Yoda be one of Obi-Wan’s instructors in his youth.

For Yoda’s return in Episode I, a new “younger” puppet was crafted by Nick Dudman’s animatronics crew. For two shots in The Phantom Menace, Yoda was realized as a computer generated character. […]

Yoda‘s creator (1979) was an Englishman: Stuart Freeborn (5 September 1914 – 5 February 2013). If his Yoda isn’t an allusion to Henry Holiday’s baker’s uncle, then he probably at least knew Henry Holiday’s Snark illustrations. Also, Freeborn himself might have been a relative of the baker’s uncle: Freeborn stated, that Yoda is “half me and half Einstein”. Who would dare to question Freeborn’s Yoda creation story?

Left (2016): Prince Mahlangu, Johannesburg, South Africa. Looking at Prince Mahlangu’s art, I am not sure whether his drawing is an intentional reference to Henry Holiday’s illustration. It also could be one of the concepts/patterns/templates which artists share with each other in a kind of collective mind.
Right (1876): Illustration by Henry Holiday (engraved by Joseph Swain) to Lewis Carroll’s The Hunting of the Snark.

Star Wars movies are full of allusions. Allusions are one of the fun parts of story telling. In this case of course it also could be that Henry Holiday as well as Stuart Freeborn (and his team) alluded to the same elf pattern independently of each other. When creating Yoda, Freeborn may have used his own face, but quite probably not his own ears. As the Knight Letter said: “Of this question, you the judge can be.” 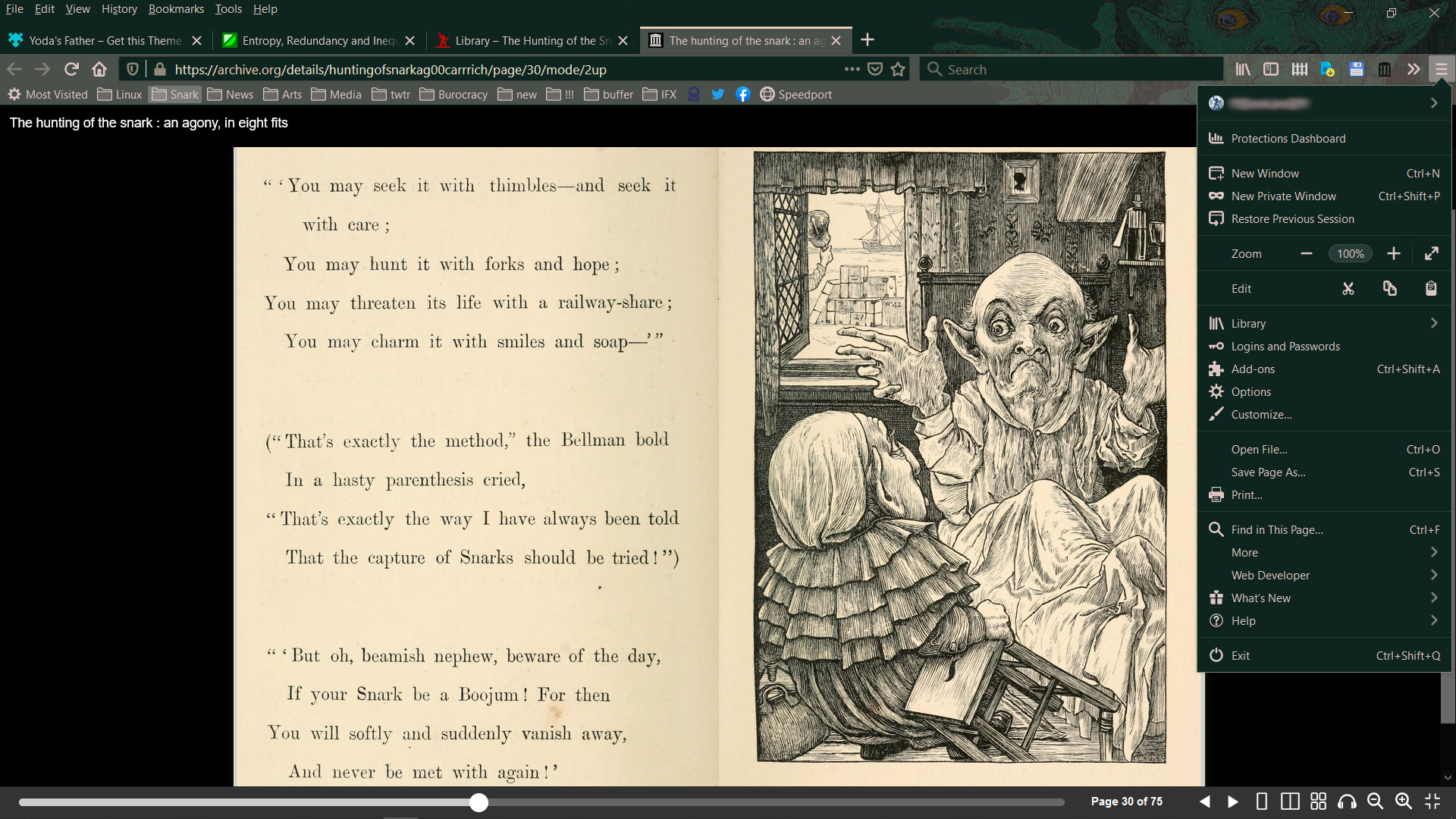